The Volgograd city Center of orthopedics and orthopedic cosmetology offer the possibility to correct bow legs or knock knees. We perform a minimally invasive surgical procedure to correct bowleg or knocked knee deformity and straighten the leg. To straighten legs, we use the original method developed by Dr. M. F. Egorov and Dr. O. G. Teterin.

1. In coordination with the patient, the doctors create the project for legs shape correction via specialized software tools that we developed. Before the operation, the patient selects his own appropriate project option and we make measurement of the distance between the internal contours of lower limbs with the use of a special device. All of these steps help to bring the planned result of the correction closer to the actual result.

2. The operation is performed on both legs at once. During the surgery, the shin bone is incised slightly at a depth of 0.5 cm from a low cut-section 2-3 cm in length, after which we fix the bone with units that we developed. The average length of operative treatment is approximately 50 minutes. The next day after the operation, patients can walk on their own using crutches.

3. Legs form correction starts, on average, on the 5th day after the operation. The correction of bow legs takes place gradually by twisting the screws on the units. The tempo, rhythm and duration of twisting is strictly controlled. It is estimated with the use of the special software, developed by us. In this way, the patient understands how long the process will take before the surgery.

The completion of the correction period is controlled by using special methods including x-ray images, and photos analysis with the help of special software. This period takes usually 8-12 days. In order to avoid the "sinking" of bone regeneration and as a result, the exacerbation of deformation, we have developed a multi-stage control of density and the strength of the regenerated bone. The main control stages are: 1) X-Ray imaging; 2) dynamic control method of bone regeneration density and 3) clinical testing for adhesion. If the density of bone regeneration is insufficient, the treatment with fixation units has to be extended.

4. Fixation stage. After correction period, the units are switched to anchoring mode. Patients extend their movement process and gradually stop using crutches. The average duration of the anchoring process is 19-22 days. Before removing the unit control, an x-ray examination is done. Units are subsequently removed with a three day interval. In three days after removing the unit, patients are allowed to walk with the use of crutches. After three more days, it will be possible to walk without auxiliary means of support and to have a normal life.

For three months after discharge, we do not recommend that patients do physically demanding jobs or recreational sports. The movement process is extended gradually 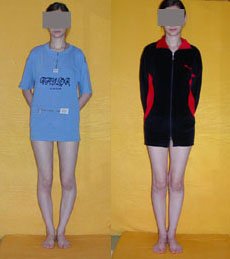 Bow legs correction. Before and after operation. More photos... 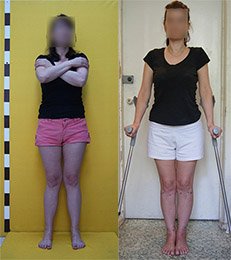 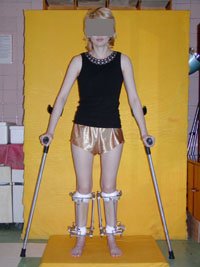